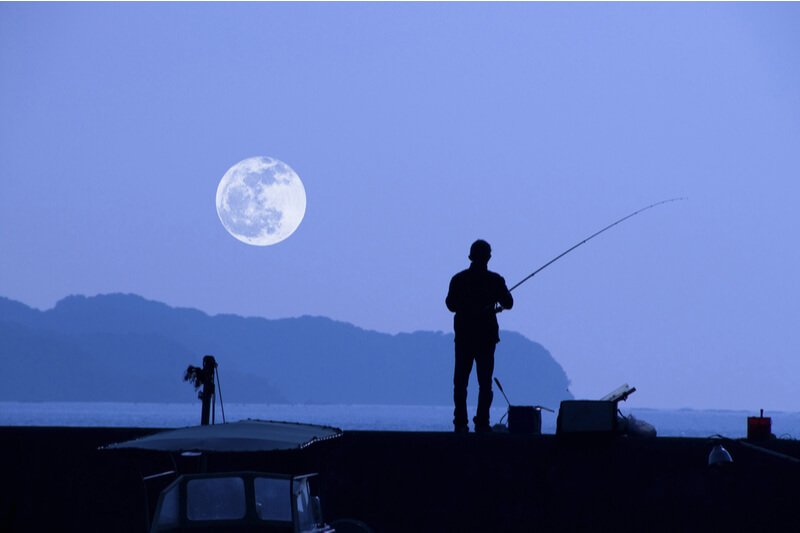 Almost every avid angler has probably heard about solunar fishing theory. At its core, the idea revolves around something we see nearly every night—the moon. Still, many fishermen and women don’t quite understand how to use it to their advantage or whether it’s worth considering. No matter your familiarity with the concept, Minor Bay Lodge put together a few tidbits to help determine whether you want to start paying attention to solunar tables or toss them aside.

Before fishing became a sport or hobby, many civilizations caught fish for sustenance, so knowing how to maximize their bounty was critical for survival. Through the centuries, generations of anglers were keen to record the environmental conditions leading to their success or failures of the day. As one of the most prominent features of Earth, the moon’s position was thought to affect animal behavior and was eventually included in their records. Finally, Doug Hannon developed a “moon clock” based on the solunar theory originally proposed by John Alden Knight. Since Hannon’s moon clock, several other professional anglers have adopted the idea to include geographic location and have created several online applications.

The Science Behind Solunar Fishing Theory

The solunar fishing theory comes from the idea that the sun and moon’s gravitational forces affect animal behavior, including fish. By experimenting with oysters, biologist Dr. Frank A. Brown illustrated that their feeding was more connected to how gravity affects tides rather than the tides themselves. Brown placed filter-feeding ocean oysters in an aquarium with no light, and for a week, they continued to open and close their shells based on their original location. But by the second week, they were feeding based on times when the moon was above or below their new location. The experiment concluded that the oysters responded to gravity caused by the sun and moon’s location and the thought has since been applied to fishing and hunting.

There are two types of solunar periods, major and minor. Major periods usually have an approximate duration of two hours but can sometimes exceed three. These periods begin as soon as the moon is overhead, a time known as “lunar transit.” Typically, lunar transit is when fish are most actively feeding. Minor periods offer a smaller window that only lasts about an hour. While these periods also increase fish activity relative to the remainder of the day, they won’t be as active as during the major period. There also seems to be an extra boost in fish activity when the sun rises or sets during major and minor times of the day.

The solunar fishing theory is something to consider when planning a trip, but really, the only way to catch fish is to get out on the water! Environmental conditions will always play a vital role in whether or not we have a successful day. Still, it’s probably best to go fishing and see what happens. The guides at Minor Bay Lodge will deliver personalized service no matter what the charts say. And thanks to minimal fishing pressure, you’ll always have a decent shot at reeling in a trophy. To learn more or book your trip, please reach out to us online or call 888-244-7453.